I have known Jessie for years. We went to high school AND college together in Maine and New Hampshire, and then happened to live in the same region across the country near Seattle for three years.  It had been about five years since we saw each other, but what better place to reconnect than eastern Europe? Jessie came to visit us before her conference in Sweden (where she presented her thesis in front of big name environmental economists!). Her original plans to hut hike in Slovenia were hindered due to her traveling companion’s recently broken ankle, so we got to spend extra time together which turned out to be positively perfect!

Day 1: Trip south to Szigliget ruins, where we enjoyed the most delicious gelato around! (Salted pistachio was to die for, but the mulberry, cappuccino and lavender were rich and memorable too)…and the Szászi Birtok winery at the bottom of the hill was a real treat! Then we had a delightful lunch at Villa Kabala, including complementary elderberry champagne, watermelon soup, a vegetable pie as an appetizer, and of course I had the duck (see Hungry in Hungary #HinH for Villa Kabala food).  After a bee-buzzy pitstop at the gorgeous Lavenderium (lavender farm) in Dörgicse and a final destination in Tihany, where we browsed the touristy shops, enjoyed flavored lemonade at Echo hilltop restaurant (see #HinH), and stopped for a few panoramic photo ops. We REALLY wanted to jump in Lake Balaton but it turns out it’s tricky to do that stealth-style in the Tihany area. We would’ve had more luck down near Szigliget! 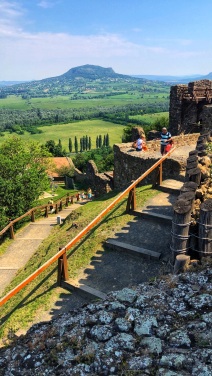 A great view from every single point! 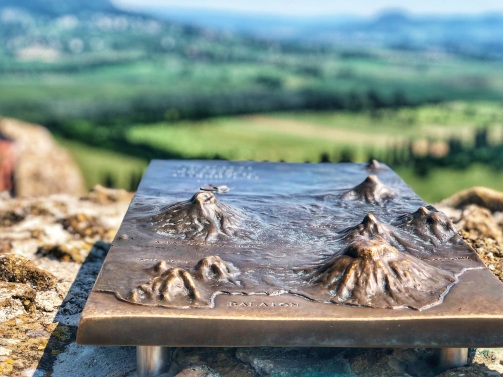 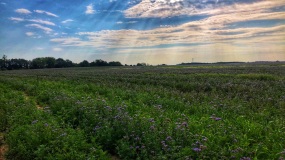 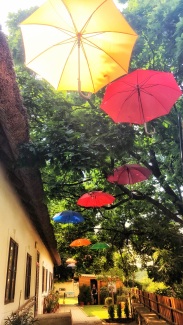 Magical path to the BEST gelato! 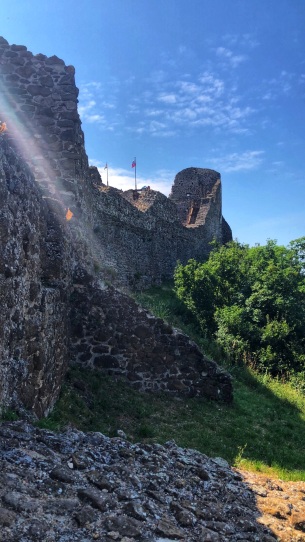 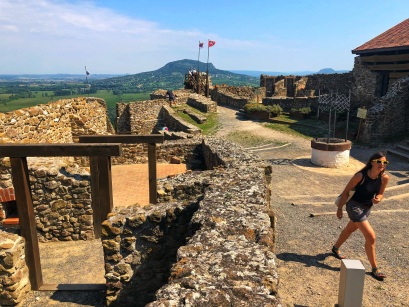 Walking up the steps to the ruins 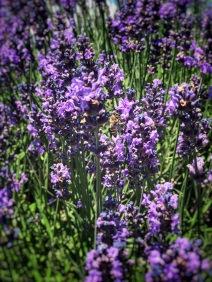 Mmmm the smell was divine! 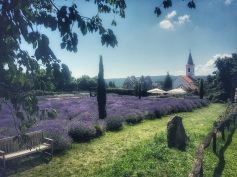 Lavenderium – the buzz of the bees was impressive and soothing! 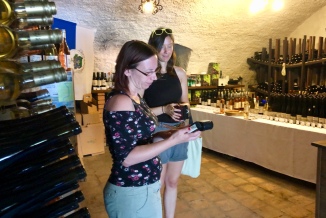 Day 2: Road trip to Slovenia! We drove straight to Stara Fuzina, Slovenia near Bohinj to drop off Jessie at Vogar trail so she could get a little hiking in. After seeing both Vogar viewpoints, she met up with us at Lake Bohinj for a chilly glacial dip in the clear green mineral waters. We had a yummy bite at Apartments-Restaurant Ukanc (I want to go back just for the delicious jumbo chicken burger with roasted vegetables on top! #HinH) and then took a sunset stroll around the lake for some beautiful evening views. We stayed at Apartments Lake Bohinj in Ukanc – very comfortable.

Horses with the mountains of Triglav National Park in the background

Beautiful vista with the Julian Alps in the background

Ukanc, where we stayed

The shores of Lake Bohinj

Green waters under the bridge in Lake Bohinj 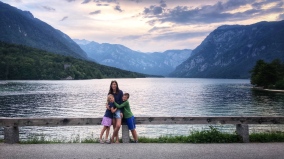 Mother duck and her ducklings!

They were so cute!

Day 3: It was drizzly and chilly, so we decided to do some bee tourism! Jessie LOVES all things that bumble and Slovenia is abuzz with api-fun! We headed to Radovljica where we explored the Čebelarski muzej (Beekeeping Museum) and walked the hillside streets. Then we went to taste some honey at the Bee Shop (čebelarska trgovina) in Lesce, see the bee hives up close and personal, and try the honey-ginger lemonade (spicy!) and honey beer (so-so). The honey, though…ohhhh the honey! Every single honey was to die for, so it was hard to decide! I ended up with sweet Acacia, rich Chestnut, and flavorful Linden honey.  From there we went back up to Lake Bled for a brisk walk around the lake, and then it was back to Papa for the night. 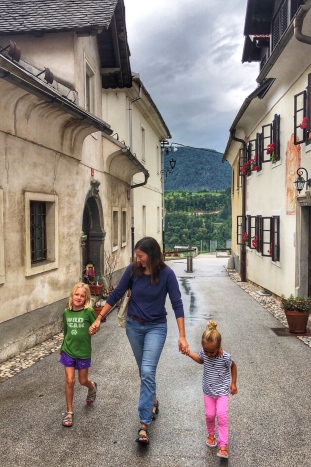 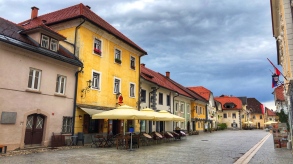 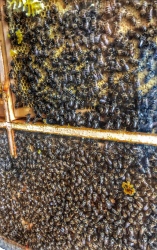 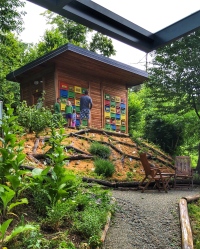 Even Willow, who is terrified of all bugs, was mesmerized by the honeybees! 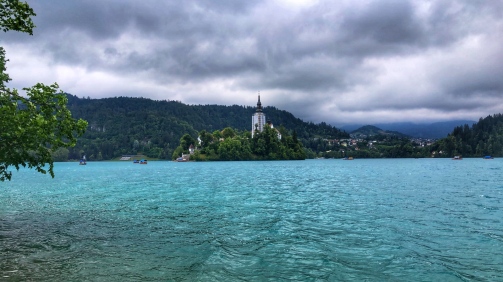 Lake Bled on a haunting day…

A tired swan, cozied up on Lake Bled

The boats on Lake Bled, Slovenia
Day 4: Our final day in Papa was relaxing and fun! We took bicycles around the town and I showed Jessie some of the sights of historic Papa, including the walking street, old theater, Catholic Church and town square. We had a nice lunch at Zabhegyezó Gastro Lounge and then followed it up with my favorite gelato in Papa, near the corner of the town square. After a chill afternoon we prepared for a sunset horseback ride…and BOY was it memorable! Jessie’s horse, Dadido, was gentle and went at his own pace. My horse, Roxi, was lively and didn’t want to get left behind! The evening was gorgeous. One for the books!

Veggie burgers on the walking street! 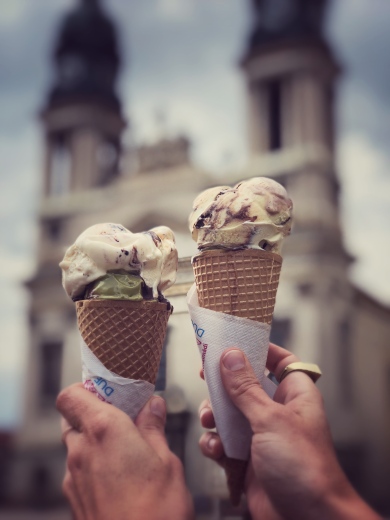 A view of Döbrönté ruins from the fields 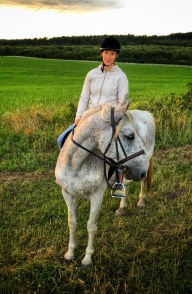 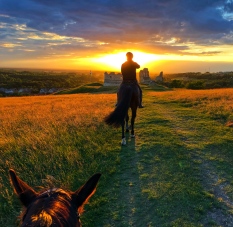 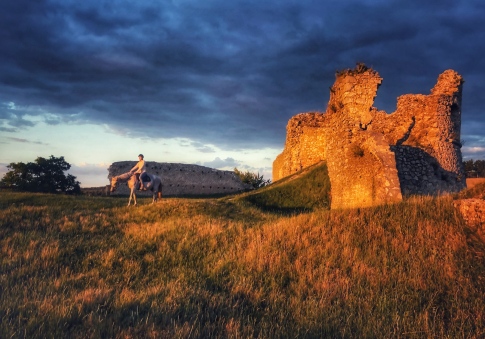 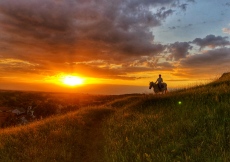 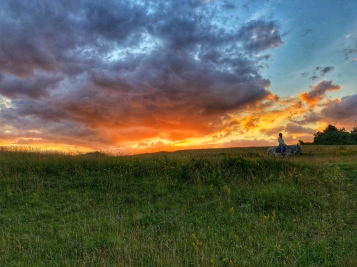 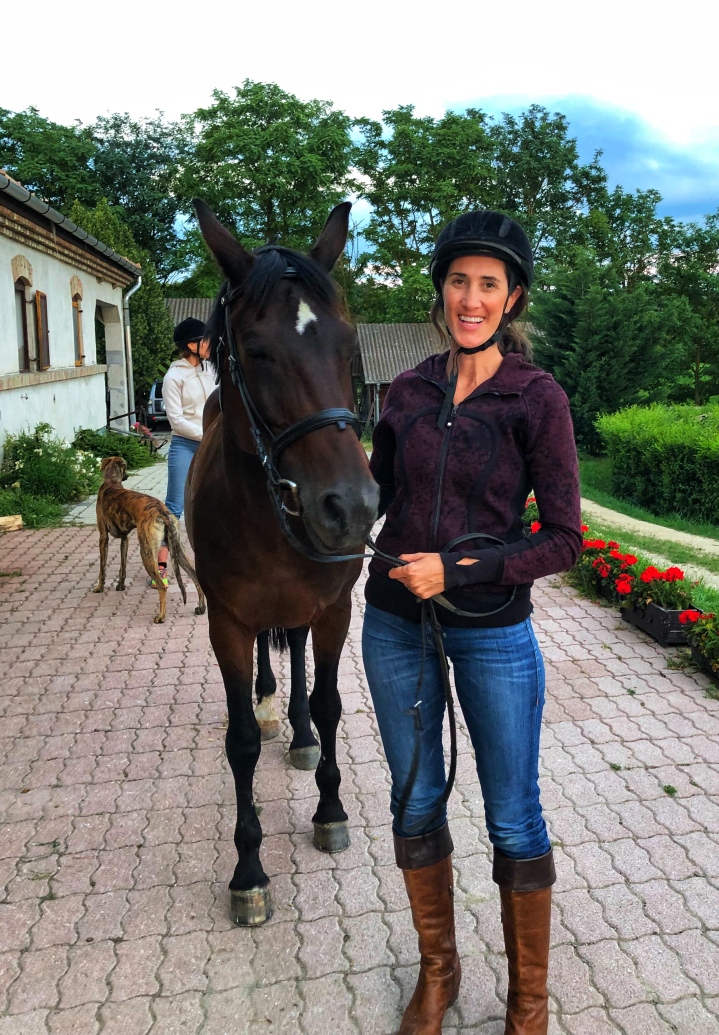 Day 5: A self-guided walking tour in Budapest! We got up early and headed straight to Budapest. We parked for free halfway up Citadel hill and walked EVERYWHERE from there! First we saw the liberty statues on Citadel hill and walked down towards the castle district where the Fisherman’s Bastion and St. Mathias Church were a sight to behold! Buda Castle was in the distance as we walked along the river and got great views of the bridges, and the entire city was arranged for the Red Bull Air Race so we caught glimpses of some impressive flying along the way! We enjoyed the Parliament building and then headed to find lunch. We had a delicious selection at a Greek restaurant near Oktober Utca, and then went straight to St. Stephen’s Basilica (all the classic spots!) and had the best gelato in Budapest at Rosa Gelato in St. Stephen’s square. It started to sprinkle so we did a little souvenir shopping and headed up the spiral staircases of the Basilica to get a marvelous view of the city from atop the grand dome. This is about when my phone died, our feet were blistered, and it was time to think about getting to the airport. We walked all the way back to the car via Vaci utca, so Jessie got the full-monty tour of Budapest on her last day! Come back soon, Jessie! Thanks for an memorable visit! 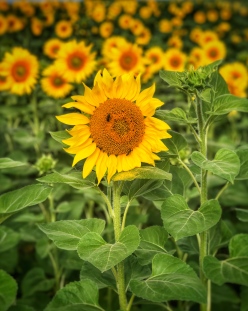 Sunflowers on the way to Budapest!

Statues at the Citadel

The view from the Citadel

A deserted Chain Bridge, thanks to the Red Bull Air Race!

Reformed Church on the Danube

Parliament guards, with the Néprajzi Múzeum (Museum of Ethnography) in the background 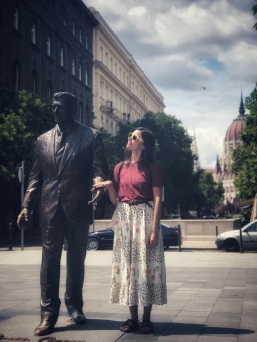 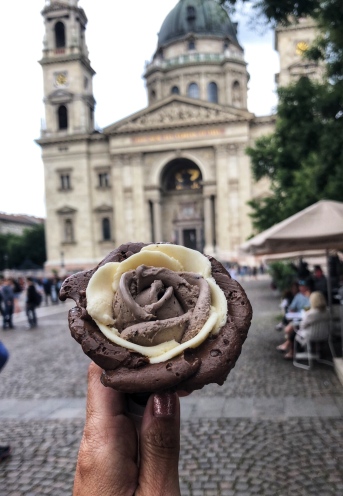 View from the top of St. Stephen’s Basilica Dome

In Prague, little D was amazed by The Lennon Wall. I’m pretty sure that since she saw it, she’s never gone a day without drawing ON herself. “Can graffiti be a job?” She asked the other day. 🤣🤩 I bet Banksy would say yes...but if that doesn’t work out, there’s always body artists! (And I can’t get enough of the toothless grin!)
We spent a long day walking all over the city of Edinburgh. The Royal Edinburgh Military Tattoo festival (not to be confused with actual tattoos) celebration was happening that night, but I was the only one in our family with enough energy to walk around the city after dark and enjoy the light show and fireworks. This beautiful view of the castle looking down Vennel street was especially memorable! I don’t usually go out by myself at night (even as a very tall woman, I still get nervous) but it was worth it for this!
🌲 I love trees! That’s no secret. They’re symbolic of everything that inspires me in life. Which is your favorite? These images, all taken at Bokrijk Kasteel represent:
The military moved us to Hungary and we were determined to make the most of our time in Europe. We had always dreamed of road tripping through the Scottish Highlands (you know, Outlander, Harry Potter, big fans...), so the first chance we got, we hopped a cheap flight to London and headed north! The forecast for the entire week looked grim, but that didn’t stop us...
—>SWIPE! The south side of Algarve, Portugal gets all the attention, when the west side has tremendous beauty, too! These photos are from Praia de Monte Clérigo, and Praia de Castelejo. Massive, cliff-lined beaches with awesome rock formations, huge waves (surfing!) and long tides. A treasure trove of all day fun! More on our favorite beaches in Portugal - link in bio!
What a gorgeous morning in Dinant, Belgium! This town is known for its picturesque buildings along the steep cliffs lining the banks of the Meuse River, as well as being the birthplace of saxophone inventor Adolphe Sax. You can’t miss the significance of the sax as there are huge saxophones all over town - each one representing a different country! My favorite part (besides the views) was checking out the delicious local boulangeries and sandwich shops. All the restaurants looked soooo good - we’ll just have to wait until after the pandemic to try them out! 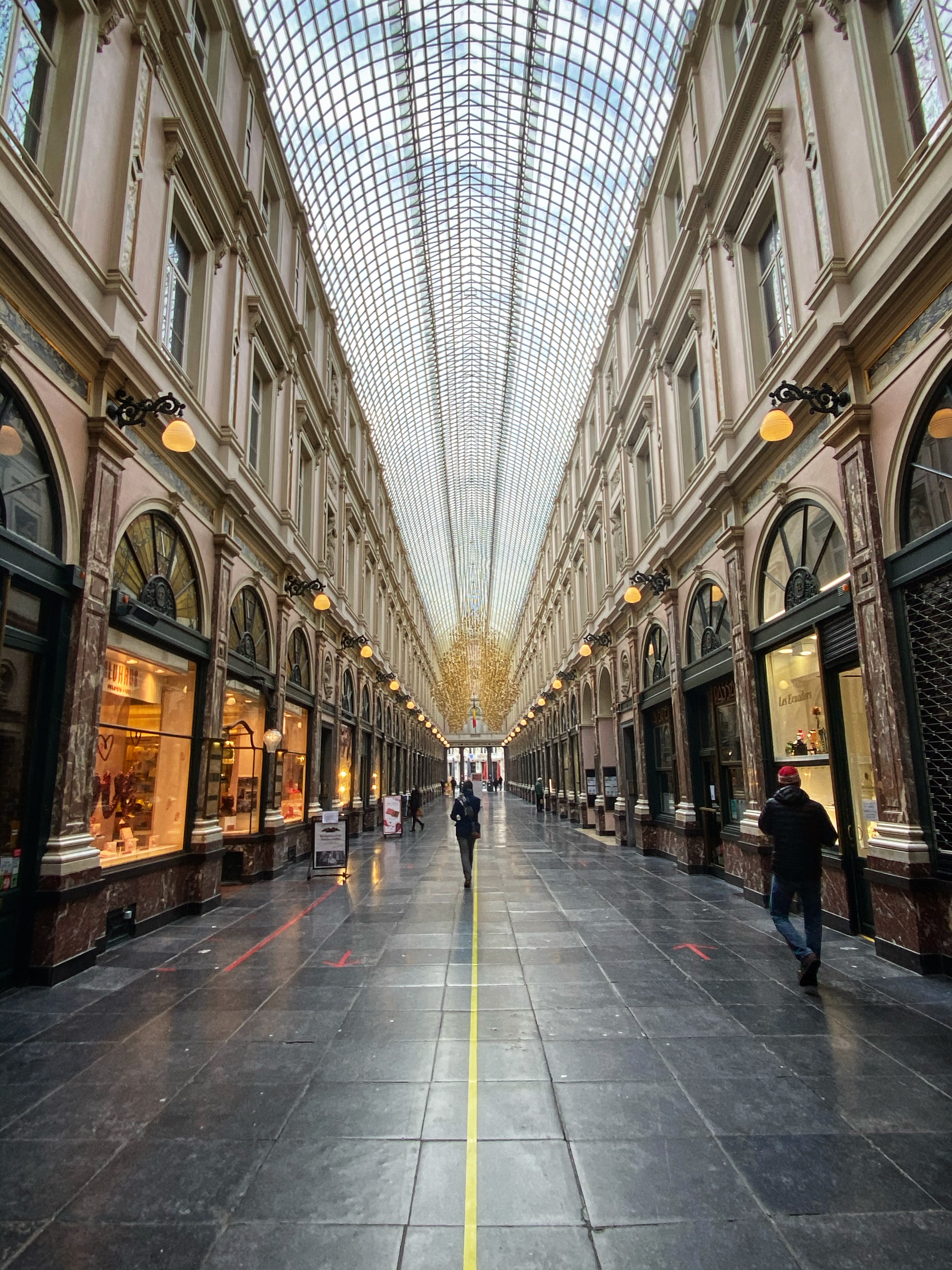