We’ve spent a lot of time in the city now, and Derek was chomping at the bit to get to the rocky peaks and glacial lakes of the Alps. Our first trip west was to the famous Lake Bled and the lesser known Lake Bohinj in Slovenia. Both were picturesque and impressive, but it was Bohinj that stole our hearts!

We arrived in Lake Bled, checked into our hotel (Hotel Kompas) and decided to walk around and go swimming at the only legitimate swimming area below the cliffs of Bled Castle. On our way we saw ducks and white swans, and cute little boats that can take you on a round trip ride to Bled island and the Pilgrimage Church of the Assumption. The water is a gorgeous green-blue and you can see through it like glass. We also passed St. Martin’s Church on our right. 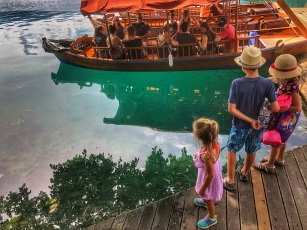 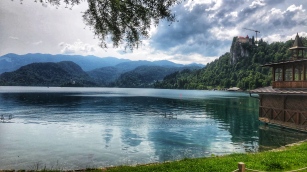 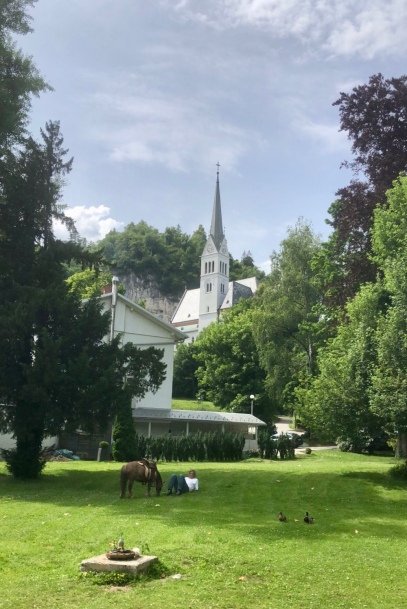 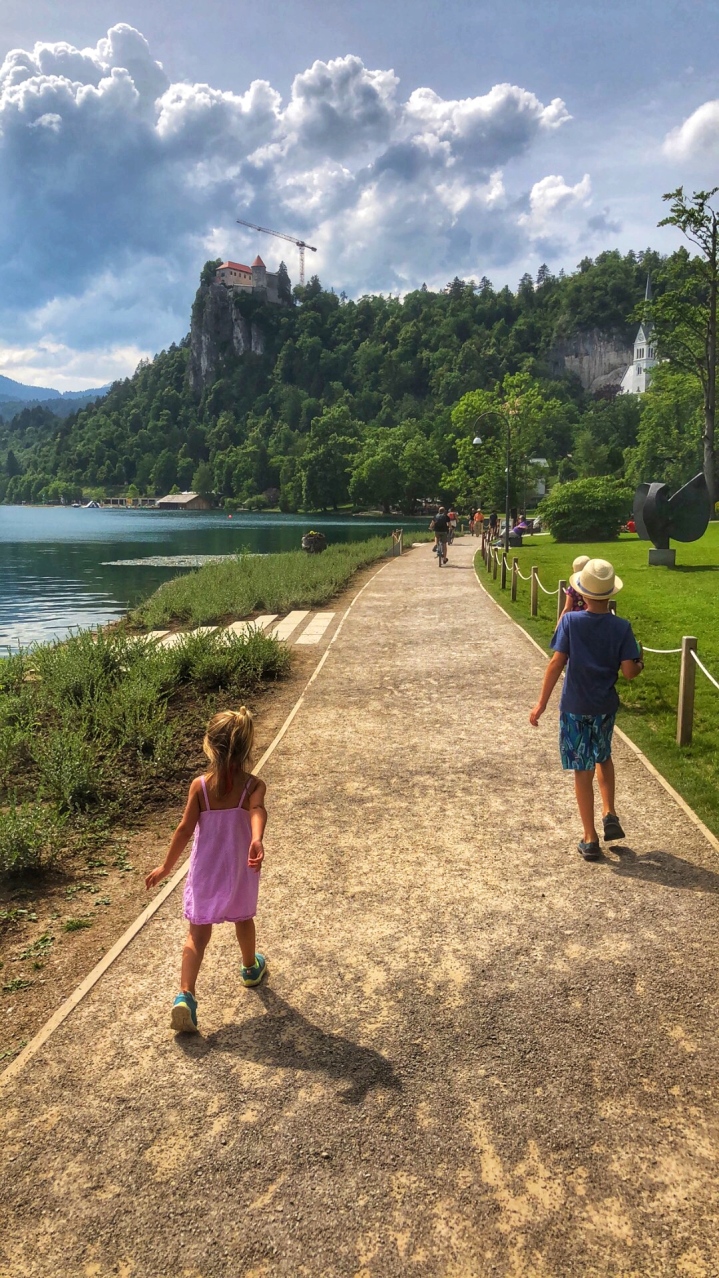 We arrived at the swimming hole and it looked SO cool! (Entrance fee for full and half-days.) Tons of massive blow up climb-on and jump-off floaties and a lovely grassy area with a sandbox, small playground and shallow areas for kids. There were little fish in the water you could see and the kids loved that!

Also, these micro frogs were impressive! We had Bonsai with us, and dogs aren’t allowed within the gates of the pool zone, so Derek took the kids over to swim and Bonsai and I walked up the steep path to the castle. I opted not to enter the castle, but still enjoyed the beautiful views, fresh air and closer view of the castle. It is under construction and from what I read, many parts of the inside aren’t viewable now, so I figured we would be back someday when reconstruction is complete and it will be more worthwhile for our money.

I could look down and see the kids and Derek swimming, and it looked so refreshing! So I asked the lady at the gate if Derek and I could switch kid/dog duty and she was so nice to allow it. The water was cold – but nothing we Mainers couldn’t handle! It was absolutely crisp and refreshing and made our hair SO soft. My favorite part was the giant floating see-saw I used with Beau and the big diving board!

We left for dinner just as the weather began to turn cloudy and threatened a sprinkle. We made it to Lavendula pizza and grill for pizzas before it began to rain. Funny, the people who waited on us said it was the first time it rained all season! After dinner it was still raining, so we went across the road to a hotel restaurant overlooking the lake to try the infamous bled cream cake! And BOY was it good! 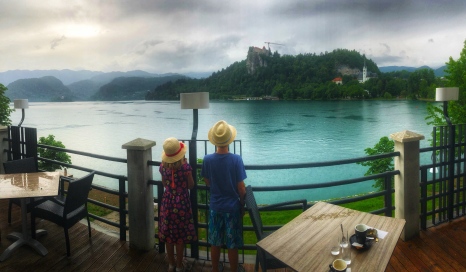 After that we went straight to our hotel for another swim. The Hotel Kompas was great – perfect location, amazing pool area (for when it rains!) and the BEST hotel breakfast I’d ever seen! I think I’d go stay again just for that! It had hot items, cold items, vegetarian items, a huge pot of local honey, more drink options than you can imagine, and my favorite part, tiny pots to brew individual loose leaf tea in! Voila!

The next morning we took a nice walk around lake Bled for a beautiful 360º tour of the small lake. 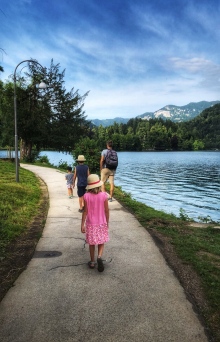 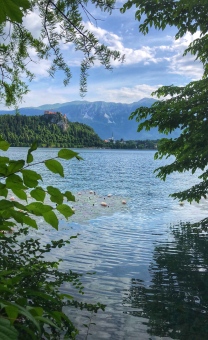 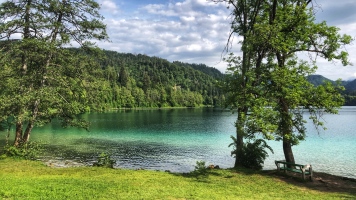 We also wanted to hike up to Osojnica viewpoint but we didn’t realize just how steep it was! It was scary at times, with Bonsai in the backpack, the kids holding onto a rope at one point, and a 65º set of stairs. YIKES! Beau kept saying he was scared and wanted to turn back, but at a certain point, it was more dangerous to go down than up! We braved it anyway and boy are we glad we did! Willow and Didi were troopers. Didi said she was scared but kept a positive attitude (and she had some colorful expressions at times!) and Willow didn’t know to be afraid, I guess, because she was encouraging her siblings the entire time. It was a great experience and very rewarding! 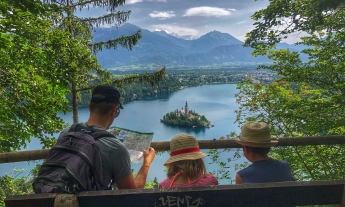 The way down was much easier, down the back of the hill. If we had known there was a longer, easier trail, we probably would’ve taken it both ways! Still, I’m glad we can always refer to that hike as an example of something scary they overcame when I remind them, “You kids can do hard things!”

Heading back, Beau dipped his feet into the lake again and we decided we were ready for another swim, so it was time to drive to Lake Bohinj. The drive wasn’t long, about 30 minutes, but it was obvious pretty quickly how different these two places are.  Lake Bled is VERY touristy. Its a well-established, more expensive, picturesque production. Everything looked like a painting. There were many more people – even tour buses – and at times felt too busy for this nature-lover. On the other hand. Lake Bohinj felt un-touched and un-tainted by tourism. The cottages were quaint, the village was quiet, and the lake wasn’t busy at all. In fact, we were able to check into our hotel (Hotel Bohinj) and make our way to a swimming hole we had heard about by lunch time and we had it all to ourselves! The following are photos of our private swimming cove, on the west side of Lake Bohinj near Ukanc. It had glorious views of the mountains, a great little rocky beach area to picnic at, and a sandbar to walk around on. Tip: bring water shoes! We were all glad to have had them! The rocks can be hard on the tootsies! Willow had a blast making rock formations and Beau challenged Didi to see who could jump in first! Look at how clear the water is…it actually got VERY deep VERY fast, so if you don’t have strong swimmers, make sure to bring floaties! Lake Bled and Lake Bohinj prohibit use of motor boats so its also very quiet and totally clean. It felt like paradise! 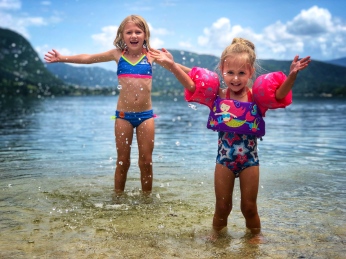 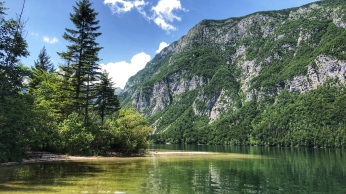 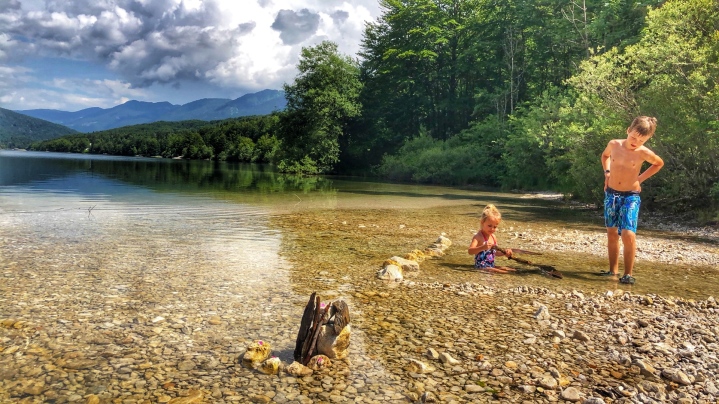 Derek and I took the opportunity to have Beau snap a few photos of us, which we never get as a couple these days! He did a good job!

Needless to say, Slovenia has stolen our hearts. But we weren’t done! When the weather decided to turn (again) in the evening, we grabbed burgers across from our hotel and sat outside to listen to the rain and smell the fresh mountain air.  Lake Bohinj is in the Triglav National Park so its much more surrounded by mountains than Lake Bled. We found most people spoke English (among other languages!) and it was very easy to get around. It helps to have euro coins handy for parking!

The next morning we made a last minute decision to hike up to the view points at Stara Fuzina. We paid €10 to pass through the parking area and drive up to the top of Vogar Viewpoint parking area (basically just the end of the road) where we then hiked about 15 minutes to the first viewpoint and another 10 minutes to the next one. STUNNING is all I can say! Positively breath taking! We were also very lucky to have seen para gliders launching from the mountain top as we arrived at the second Vogar viewpoint. (Look closely in photo below! Someone just launched!) 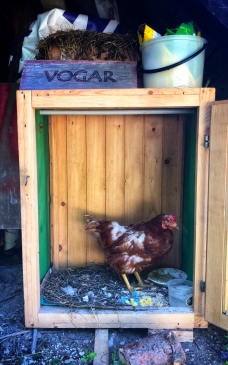 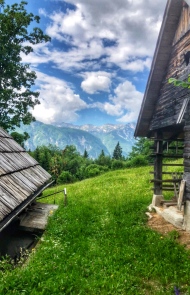 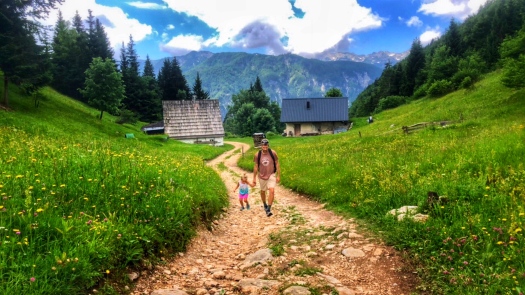 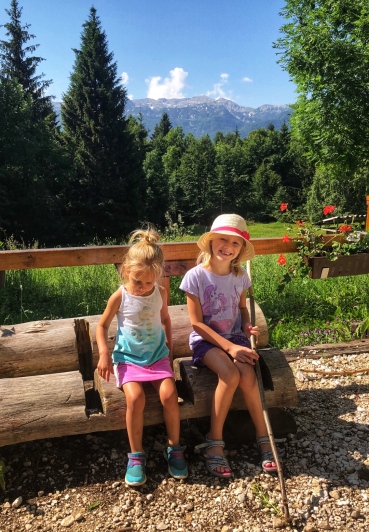 We were sad to have to leave but knew it wouldn’t be long before booking another trip to this region, only about 5 hours from our hometown in Hungary!

🪶MY FIRST CAROUSEL! Swipe to see!
🌲THE NORTHERN MAINE WOODS
📌 SAVE THIS POST!
📌 SAVE THIS POST! Have you been to a Scottish castle? Which ones have you seen? We have been to castles all over Europe but there is just something about the castles in Scotland that charmed us!
🇭🇷 These photos are from the last time we saw my parents in April ’19 and toured around Croatia…finally, at long last, we get to spend time with them again this month in Maine!! I’m sharing about our visit and all the Maine things in my stories, but I am soaking up every moment here and will be sure to catch up on everyone’s beautiful content when I can!
📌SAVE THIS POST!!!