Derek has quarterly trainings outside of London so this time we decided to tag along and make a vacation out of it.  One of my great friends from college is British and lives in London with her wife and beautiful new son so we were extra excited to see them too! We arrived at the Stansted airport late, and the whole place was a circus. Luggage didn’t arrive for almost two hours after we landed, so Derek stayed to wait for the bags while I took the kiddos to the airport hotel to sleep, after 11pm!  We learned that’s what happens when you fly the cheapest airlines (RyanAir) to the most disorganized airport in London (Stansted). We’ll know better for next time! The next day we drove 40 minutes or so into London, as everything is a commute in this part of the UK.  My friend Rachelle and her wife Jane live in the Bow Quarter, which was just lovely!

It reminds me of Harry Potter.

I was so happy to introduce my own little family to Rach, meet Jane and finally see their sweet new baby boy! We were lucky that there happened to be a festival happening that day called the “Bow Quarter Festival” and we enjoyed activities for kids, awesome live music, a dog show, and plenty of delicious local gin and wine! 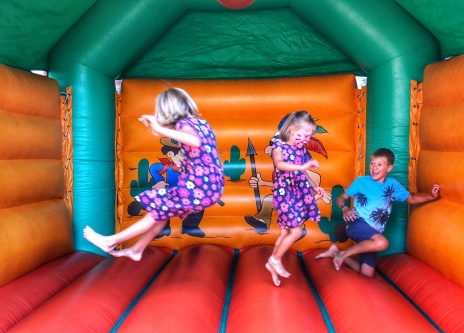 Even Gabe liked the bouncy castle!

We discovered these little fairy doors, and Rachelle explained that after babies are born in the Bow Quarter, a little fairy door is added to a tree in the gardens! Its so sweet! It was a relaxing visit, and I was happy to be able to go out with just Rachelle for a quick bite at a local pub while Derek put the kiddos down to sleep.  We stayed the night right in the Bow Quarter at one of Rach’s neighbor’s flats, which was super convenient.

Pub time for me and Rach!

Our flat for the night!

The next day we had a proper English Breakfast with Rach and her family at The Empress restaurant by Victoria Park.  After breakfast we had a lovely walk around Victoria Park while the kids played, and stopped through the farmer’s market before heading to our next destination. 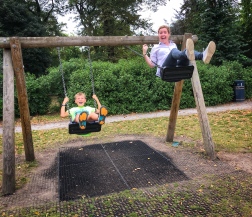 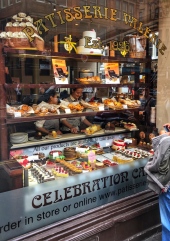 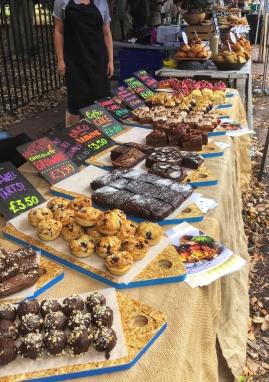 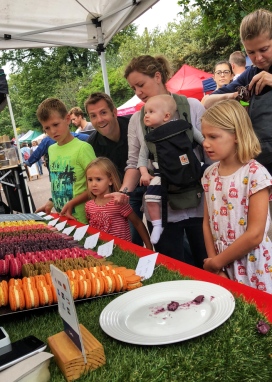 Thank you for the splendid visit, Rachelle and Jane! Can’t wait for the next time – hopefully it won’t be so quick, but so glad it worked out! ***And thank you SO much for facilitating the purchase and move of our backyard dome climber – oh, the trials of overseas living! It only took 5 months to get this sucker to Hungary but it was well worth it! Couldn’t have done it without you!

After leaving the ladies to their travel plans, our little family set out to our next destination, a hotel near Heathrow Airport to make travel for Derek’s work easier.

It was about an hour away so I decided to make haste in the drizzly weather via the tube (London’s underground metro) to Oxford street for some shopping sans children.  The goal was Harry Potter gear for our tour on Monday evening! I hit the jackpot at the Oxford street Primark and filled up a huge bag for super cheap. Score!  It takes SO LONG to commute through London – something that intimidated me with planning at first – but this time it turned out to be tricky because my huge Primark bag tore and all of the new Harry Potter gear nearly fell out on the train! I made it back – phew! – by wrapping my shirt around the bag.  Mom hack for the win!

We hadn’t planned to go to Stonehenge, but we had a wide-open day until the late afternoon’s Harry Potter WB Studios Tour, so we decided to take off early the next day and drive out to the ancient stone circle on a whim! It was a great decision and a perfect day to view Stonehenge. The exhibit in the hall is really well done and the site itself is so cool to see in person. I’d say its one of those landmarks – if you see it once, that’s probably enough!

It was fun to walk around the entire circle! 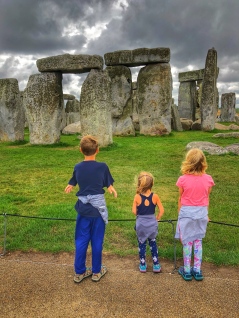 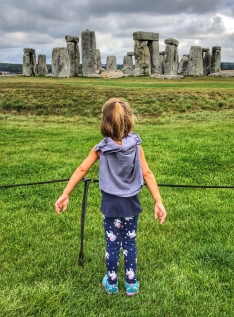 When we were leaving Stonehenge, around noon time, it had gotten SO busy! We noticed the queues backing up on the road too as we drove back to London. Its worth getting there early if you want to visit the HENGE! It was easy peasy for us and well worth the little drive outside of town.

When we got back from Stonehenge we had to get ready quickly for our much-anticipated Harry Potter Studios tour. I’ll write a separate blog about it – it was definitely the highlight of our time in and around London!

The next day we had a “big bus” tour planned where we could hop on and hop off at locations around London. We made it into town to catch the bus and randomly ran into some Papa friends!

With the near-hour commute on the tube into the city plus over the top wait times for our buses, our excitement dwindled quickly for the double-decker delight. We needed to leave town by around 3pm to get back for Derek’s training, so we ended up with about three hours on the bus seeing sights. That morning the buses were running on alternate routes due to a suspected terrorism incident – a car accident in the Westminster area.  The big busses are always fun, but they can also be frustrating when you end up waiting as long as you’re actually ON the bus touring! I was hoping to see a bit more, and photos from the bus turn out … well, touristy.  I would recommend doing the big bus tours ONLY if you have a FULL day to do the entire route, hop on and hop off at your leisure, avoiding days when terrorism incidents happen, and DEFINITELY not in the high-busy season of the summer! Ha! We learned our lesson. Still, we ended up seeing quite a bit…

I LOVE the old buildings around London. Despite the ever-modernizing skyline, these gems stand out as historical gems! 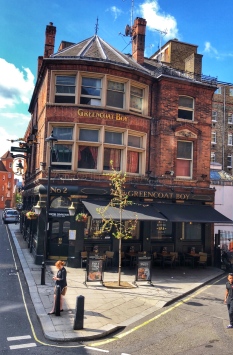 We saw a few popular landmarks…

The Tower of London 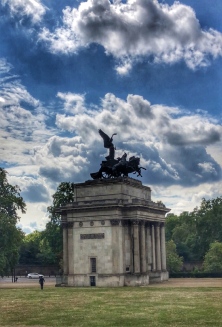 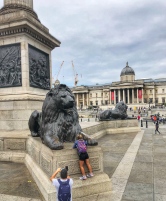 The streets were bustling and beautiful… 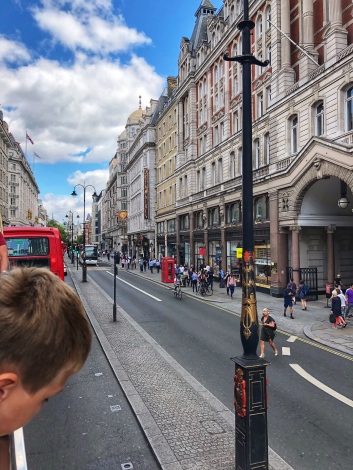 And so were the London Classics!

And so were these adorable London Taxis!

After another great pub lunch we headed back to the hotel via Savage Gardens – Ha! – near the Tower of London! 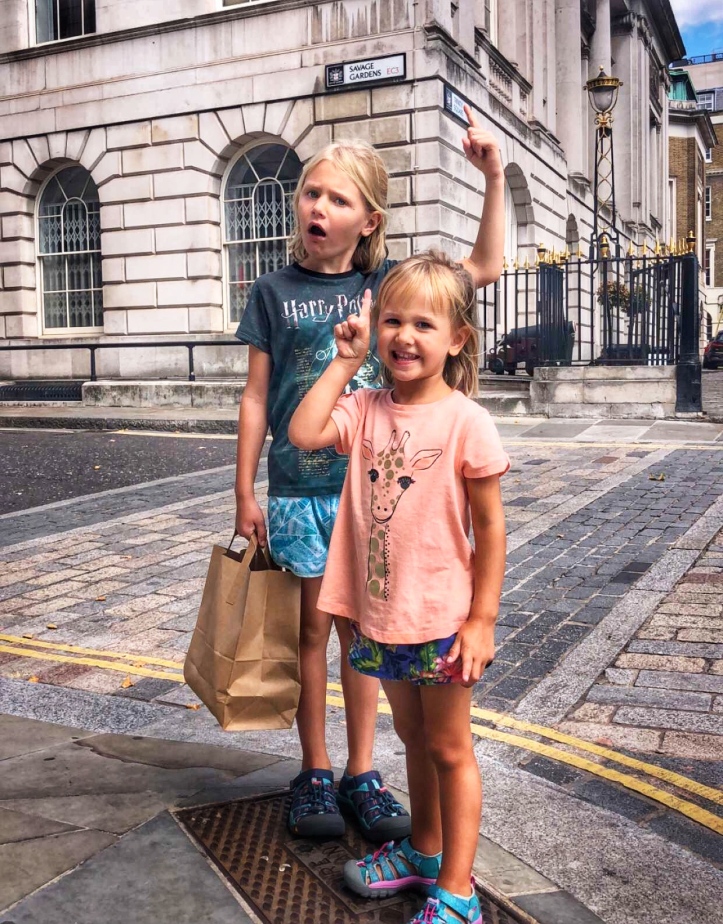 On our last day we decided to do something CRAZY – go to the changing of the guard! This was the only thing on the agenda for the day besides spending a couple of hours in the London Science Museum. It is an absolute madhouse at the changing of the guard and we ended up trapped in what felt like a million people! Thanks to long arms we got to see a little bit of the events but we sure learned a lot about what is and isn’t worth “seeing” in this big busy city! All of these photos are from the two or so hours we spent watching this once-daily ceremony… 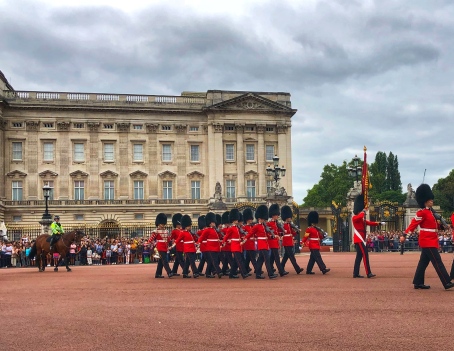 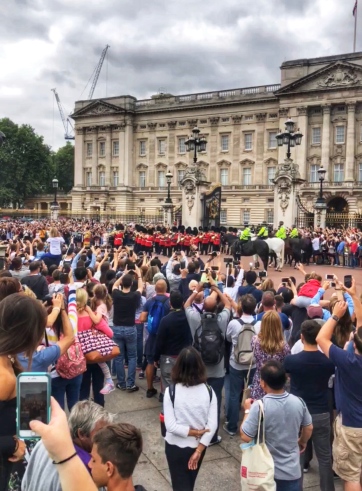 After the Buckingham Palace circus we headed towards Kensington. We really enjoyed the South Kensington food and shopping square area. Just lovely! I have never seen so many afternoon tea shops in my life! We had a yummy lunch at a pizza place near the museum district and then headed to the Science Museum. The kids were bummed we couldn’t go to the Natural History Museum but the lines were SO long we opted for the less-busy Science museum and it turned out fun! 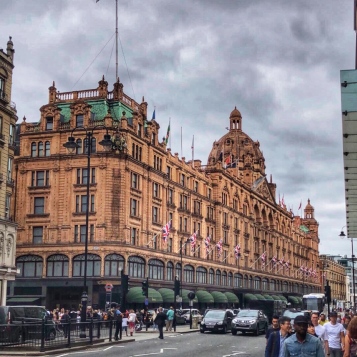 Harrod’s on the way to Kensington

A pit stop for delicious macarons from one of the many tea shops on the way! 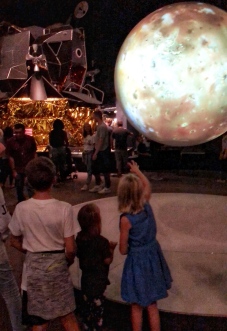 Ultimately I’m glad we went, but if you asked the kids what their favorite part of London was, they’d say the Harry Potter tour and the POOL at the hotel! Ha! It doesn’t take much to entertain them, but they were VERY good sports with the long walks, long commutes, long queues and tons of waiting in London!  Worth noting is Beau’s new obsession – British game shows! HAHA! He discovered them at the hotel and talked about them constantly. Mostly the triva-type ones…he gets so into them! We are in for it now! hahaha

It was a memorable and educational time in the city but we were ready to get out on the open roads and out in nature! Scottish Highlands roadtrip here we come! Read about our 10 days in the north here [link not yet active].

Can’t. Get. Enough. Slovenia.
🔓 Where is the BEST Love Lock Bridge you have ever seen? Have you ever left a love lock on a bridge?
🍁 Where is the best place you have ever seen fall foliage? I’m from Maine, so my standards and expectations are pretty high for autumn. Northern Maine (near Baxter State Park) is one of my favorite leaf peeping landscapes.
#TBT !
🥾SAVE THIS POST! Who knew Hungary was such a great place for hiking? The region around Lake Balaton boasts an elaborate system of extinct volcanoes, each with trails to the top that are just challenging enough to be a workout but are also family friendly. It’s not like hiking in the Alps, but it is awesome for day excursions with rewarding views overlooking Lake Balaton, the hills, and the vineyards in this region! Which pic is your favorite? Here are my favorite hikes in Hungary - bonus, many have castles or ruins to explore at the top! For more info on each spot, please see link in bio!
💎 Antwerp, Belgium is the Diamond capital of the world. For several centuries, Antwerp (then Europe’s largest port, now it is second to Rotterdam) has been home to all major diamond mining companies and some of the worlds most gifted master diamond cutters.